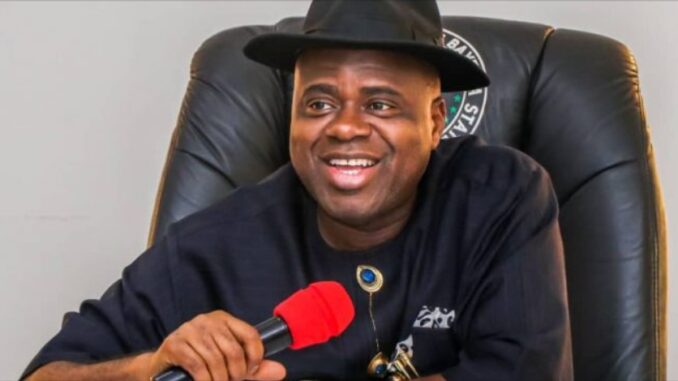 By Shedrack Frank
Yenagoa, April 6, 2021 Gov. Douye Diri of Bayelsa on Tuesday rewarded the state’s under-18 female handball team with the sum of N3.5 million for winning a recent national tournament in Lagos.

Diri announced the reward while receiving the team at Government House in Yenagoa, describing the players and officials as shining ambassadors of the state.

He also described the team’s triumph as a miracle because of the odds against them and commended their determination to come back home with the trophy.

“The road to success is not always rosy as it takes sacrifice and hard work to overcome all obstacles,” the governor said.

Diri, who was full of praises for the handballers, expressed his appreciation on behalf of the government and people of the state to them for making the state proud.

“I’m aware that you struggled on your own, having faith in God to say you want to deliver this cup to the governor and people of Bayelsa.

“I say a big ‘thank you’ to all of you for your star performance and for believing in what we have been preaching.

“You are good examples of good students who listened to their teacher and had faith in the teacher to become what you want to be in life.

“You represented us very well in Lagos in spite of the financial challenges and inadequacies that you must have encountered.

“You still told yourselves that this cup must return to Bayelsa. That is the way to success, which is always very rough, narrow and mostly winding.

“For you to get access to a rose, you must experience thorns,” he said.

Diri, who is a former Bayelsa Commissioner for Sports, charged the players to brace up to the challenges ahead as they prepare to represent the country at a championship abroad.

He announced also that the team’s preparation and trip to the tournament would be taken care of by the government, while promising a handsome reward if they emerge victorious.

Speaking earlier at the occasion, head coach of the handball team, Opuene Yekorogha, said they were proud to represent the state in spite of the initial hiccups of poor funding.

Yekorogha, who thanked Governor Diri for coming to the team’s aid financially, said they were determined to do better with the backing of the state government.

He disclosed that the team has qualified to attend an international championship in Sweden or Spain, which would be held in June.