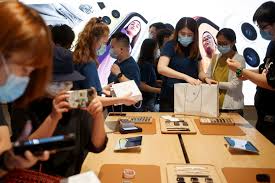 KEY POINTS
Analysts polled by Reuters expected first quarter GDP to increase 19% from a year ago, when the economy shrank by 6.8% during the height of the domestic outbreak of Covid-19.

GDP soared 18.3% in the first three months of the year from a year ago, China’s National Bureau of Statistics said Friday. That’s slightly below expectations of a 19% increase, according to analysts polled by Reuters.

The surge in growth comes off a contraction in the first quarter of last year, when the economy shrank by 6.8% during the height of the domestic outbreak of Covid-19.

China was the first country to deal with the disease, and the economy returned to growth by the second quarter of last year.

GDP expanded 10.3% in the first quarter when compared with the same period in 2019, the statistics bureau said.

The slower growth in industrial production came despite more workers staying put during the Spring Festival and not traveling home for what can be a month-long holiday.

The statistics bureau cautioned in an English-language statement that the spread of Covid-19 globally and the “international landscape is complicated with high uncertainties and instabilities.”

“The foundation for domestic recovery is yet to be consolidated and long-standing structural problems remain prominent with new situations and issues arising from development,” the bureau said.

The urban surveyed unemployment rate ticked lower in March to 5.3%, but that of China’s youngest workers aged 16 to 24 remained a high 13.6%, the data showed.