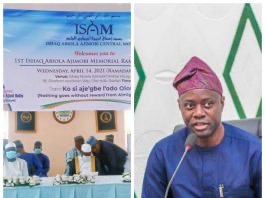 By Adeyemi Adeleye
Lagos, April 14, 2021 Mr Jimmy Fatunbi, an observer at the just-concluded People’s Democratic Party (PDP) Southwest delegates’ congress, on Wednesday said that the outcome of the congress had disappointed doomsayers.
Fatunbi, a Lagos PDP member, told the News Agency of Nigeria (NAN) in Lagos that the delegates’ congress held on Monday in Osogbo, Osun by the main opposition party had proven that the party was a united family.
According to him, despite the tension-soaked politicking among the gladiators before the congress, the event turned out to be peaceful and the results further unified the party.
“As an observer at the just-concluded PDP South-West Congress held on April 12, in Osogbo, Osun State, I witnessed a peaceful and well-organised electoral process like never before.
“Undoubtedly, the peaceful congress engendered by mutual overtures of peace between Gov. Seyi Makinde of Oyo State and former governor Ayo Fayose of Ekiti is worthy of emulation,” Fatunbi said.
He decried the allegations from some quarters before the congress that 150 illegal ballots were being clandestinely given to a gladiator to manipulate the results of the election.
Fatunbi said: “The baseless allegation held that the national body of the party had made 150 ballot papers available to Gov. Seyi Makinde in his bid to rig his way in, as if the governor is in the race.
“Another is captured in the concocted story of an attack on the former Governor of Ekiti State, Ayodele Fayose, who was reported to have been mobbed by over 150 thugs while he was in his hotel room.
“The recurrence of the figure ‘150’ casts a doubt on the claims by those who were either willing to attack some personalities at the national headquarters of the party or determined to rub the congress of its success,” Fatunbi said.
He said that Fayose’s comment as voting was about to start that he would accept the outcome of the congress was interpretative of his confidence in the process and outcome.

The observer said that since Makinde and Fayose had embraced the outcome of the congress, their followers should sheath their swords and have respect for National, Zonal, State, Local Government and Ward officers.

Fatunbi added that since the two gladiators had agreed on the newly constituted party zonal executives, it was a clear message that all disgruntled members of the party in the name of purported leadership feud between Makinde and Fayose should allow peace to reign.

He urged all stakeholders to chart a progressive way as the party looked forward to 2023 general elections.

Olafeso polled 330 votes while his opponent, Arapaja, polled 343 votes while 10 votes were voided at PDP South-West delegates’ congress held on Monday in Osogbo