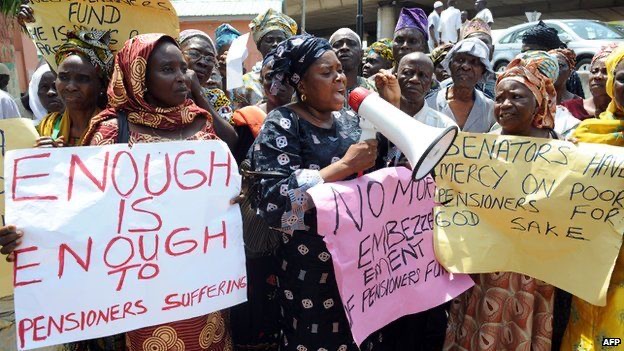 Nigeria pensioners, who retired from the electricity sector, have urged President Muhammadu Buhari to intervene in the lingering issue of N35 billion arrears owed them.

The pensioners under the aegis of Electricity Sector Retiree Welfare Association (ESREWA) led by its President, Elder Benjamin- Maisamari Amako, said this while addressing newsmen at the end of its National Executive Council (NEC) meeting on Friday in Abuja.

Amako said the delay in payment of the pension arrears had led to untold hardship for its members.

“Interestingly, President Buhari has already directed that this same arrears be paid to us.

“But for over five years since the President’s directive, the relevant authorities whose responsibility it is to ensure we get the arrears for our dying members, seem to be working contrarily.

“So for the past five years, the arrears have always been part of the National Budget under the Nigeria Electricity Liability Management Company (NELMCO) budget and accordingly transferred to the Pension Transitional Arrangement Directorate (PTAD).

”But sadly, we have not been paid a dime even as I speak, for reasons that are totally and obviously human making.

“So we are pleading with President Buhari, the Minister of Finance, Chairman, Senate Committee on Power, Accountant General of the Federation, PTAD and other relevant authorities to save our lives by paying us this money without further delay, ” he said.

He also noted that every Nigerian, including President Buhari knew the pathetic situation of pensioners in the country, saying that immediate action should be taken to address the issue of the arrears.

He, however, expressed joy that the President had successfully returned from his medical trip to London.

He also wished the President good health and longer life, while urging him to use his first resumption day at the office to save countless dying pensioners whose fate were tied to the delayed payment of arrears.

Amako, however, noted that Buhari’s administration remained the best so far for pensioners, because of the ensured timely payment of monthly pension to Federal pensioners.(NAN)