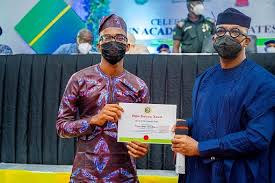 By Abiodun Lawal
Abeokuta, April 22, 2021 Gov. Dapo Abiodun of Ogun has donated a two-bedroom bungalow and N2 million to the 2020 overall best graduating student of Lagos State University (LASU) Oladimeji Shotunde, an indigene of the state.
The governor made the announcement during a celebration of Ogun academic laureates 2021, held at the Obas Complex, Abeokuta, on Thursday.
The News Agency of Nigeria (NAN) reports that the governor also gifted Mr Ademola Adeeko, of Baptist Boys High School, Abeokuta, winner of 2020 African Union Continental Teacher’s Award, a two-bedroom bungalow.
The governor announced that the state government would also set up an education endowment fund for Miss Faith Odunsi of the Ambassadors College, Ota, in Ogun, winner of Global Open Mathematics Tournament.
He noted that the event was another symbolic confirmation of the status of the state, not only as the education capital of Nigeria, but as the intellectual melting-pot in Nigeria.
Abiodun said that education remained one of the biggest industries in the state and one of the proudest legacies bequeathed to it by her founding fathers, promising that the government would sustain the legacy.
“This is why immediately on assumption of office on May 29, 2019, we declared a state of emergency on education. It was a methodical and calculated approach to rescue the education sector from the dwindling fortunes inflicted on it by the indifference of the past.
“What could have happened to the education of the state that produced the likes of Prof. Wole Soyinka, the first Nigerian and African to win the Nobel Prize in Literature; Prof. Thomas Lambo, the first professor of Psychiatric Medicine in Nigeria?
He listed others produced by the state as Prof. Biyi Afonja, Professor of Statistics; Prof. Olikoye Ransome Kuti, the renowned Paediatrician; Emeritus Prof. Theophilus Ogunlesi, the first Professor of Medicine in Nigeria; Prof. Oyinade Olurin, the first female Professor of Medicine, Prof. Anthony Asiwaju, foremost Historian.
Abiodun said that the present administration focused on infrastructure development, human capital development, provision of conducive environment, among many others, to redeem the sector and restore the lost glory.
He assured the people that the state government would continue to put measures in place toward providing quality education necessary for the development of the state.
The governor charged teachers, as important stakeholders, to continue to discharge their professional duties creditably beyond the new demands of COVID-19.
He appealed to teachers to ensure that the children were adequately catered for physically, mentally and socially in preparation for future challenges.
NAN reports that Soyinka; Prof. Isiaq Oloyede, Registrar, Joint Admission and Matriculation Board (JAMB); and Prof. Anthony Asiwaju, Professor of History, joined the event virtually.
They commended the governor for recognising success, urging him to continue to take the state to greater heights.
NAN reports that the governor also honoured 25 others for academic excellence.