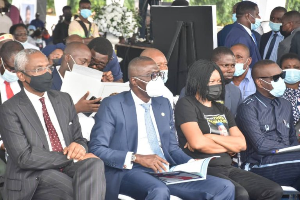 By Adeyemi Adeleye/Oluwatope Lawanson
Lagos, April 22, 2021 (NAN) The Speaker, House of Representatives, Femi Gbajabiamila, on Thursday described the late activist, Yinka Odumakin, as a man of courage, integrity and truth.
Gbajabiamila made this remark at the Lying-in-State, Service of Songs and Tributes for the late spokesman of the pan- Yoruba socio-cultural group, Afenifere, in Lagos.
Gbajabiamila, who said that he had a distant but good encounter with Odumakin, eulogised the late activist’s stand against all odds.
He said: “My knowledge of him was based on admiration of his qualities, what he stood for and what he represent and of who he was.
“I came to know from a distance, a man who had been through so much vicissitude of life, twists and turns but who in all of these stood straight.
“When you talk about profile and courage, I am not sure like many others attested too today, that you can count on one hand any whose name will come before Yinka Odumakin.
“There lies a man of courage, there lies a man of integrity, there lies a true democrat, a man who stood for truth, and nothing else.”
He said that everyone gathered not to talk about Odumakin’s schools, circumstance of birth but his character and service to humanity.
The speaker said that he was out of the country when the unfortunate incident took place, hence the need to leave the National Assembly to come and pay last respect
Gbajabiamila said that everyone should always think of what he would be remembered for after death.
He described the widow, Joe Okie-Odumakin, as a jewel of inestimable value, urging her to continue in the activism for Nigeria and humanity.
NAN reports that the event was graced by a host of civil society and ethnic groups, political stalwarts, lawmakers and many friends and acquaintances of late Odumakin.
Among the dignataries were Gov. Babajide Sanwo-Olu of Lagos State, former Govs. Peter Obi of Anambra, Ibikunle Amosun of Ogun, Olusegun Mimiko of Ondo, Sen. Opeyemi Bamiidele, Sen. Basir Ajibola, Afenifere leaders and many others.