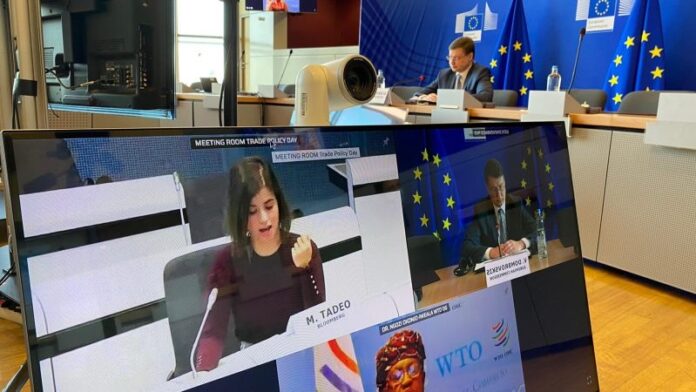 The managing director of the World Trade Organisation, Ngozi Okonjo-Iweala, said she wants to discuss China’s industrial subsidies but also state aid given to farmers, such as Europe’s Common Agricultural Policy, as part of efforts to improve the multilateral trading system.

In a videoconference organised by the European Commission on Monday (26 April), Okonjo-Iweala said that one of her three priorities for this year will be to tackle agricultural subsidies, which are mostly given by developed nations including the US and the EU.

This is an issue “very dear” to many WTO members, especially developing nations, she added, saying “we need to try to deliver in this” during the ministerial meeting of the organisation taking place by the end of the year.

Okonjo-Iweala said she wants to obtain results on fisheries subsidies and in facilitating access for people in poor countries to COVID-19 vaccines, “while protecting research and development”.

The World Trade Organisation appointed Ngozi Okonjo-Iweala as its new director-general on Monday (15 February). The WTO’s first female chief and the first one to come from the African continent takes the reins at a time when the organisation needs to reform to respond to growing global challenges and trade tensions.

Okonjo-Iweala, a Nigerian economist who became this year the first African candidate and the first woman to lead the WTO, put the discussion of agricultural subsidies into the context of how to deal with China, including its industrial subsidies.

The European Commission’s executive vice-president Valdis Dombrovskis, who is responsible for trade, said during the same event that state support provided by Chinese authorities to its companies is one of the issues that Europe, the US and other likeminded countries like Japan are trying to address jointly through the WTO.

The EU and the US are also pressing China to open up its economy and end the force transfer of technology imposed on foreign companies on its territory.

Okonjo-Iweala noted the “very significant” weight of China in the WTO, reminding that it represents one quarter of global exports.

She said Beijing wants to see progress on agricultural subsidies, which currently represent around €1 trillion and could double by 2030.

“I would like to look at subsidies across the board” and see how “from all perspectives we are creating a level playing field,” the WTO chief said.

As a starting point, she explained that the WTO is cooperating with the World Bank and the OECD to look at all subsidies.

Okonjo-Iweala was confident that, with facts on the table, including the negative spillovers of industrial subsidies, China will be willing to look at it.

“I think we can do some headway,” she said.

But she added that it is “important” that “China does not feel targeted. “When China feels it is being targeted, and it’s only about China, you get a lot of resistance,” she said.

Europe and the US are trying to update the WTO’s rulebook to better cope with new challenges, including those brought by the rise of China or the digital economy.

But any changes in the multilateral trading system requires consensus among the WTO’s 164 members.

“It is clear we need to engage with China” and find a way to manage the relation with the second largest economy, whose GDP is expected to surpass the US in the coming years.

Last year, China also became the main trading partner of the EU, ahead of the US.

China pushed past the United States in the third quarter to become the European Union’s top trade partner, as the Covid-19 pandemic disrupted the US while Chinese activity rebounded.

Dombrovskis said “it is known the EU-China relation is unbalanced” because the European market is more open, an issue both sides tried to correct with the investment deal agreed last December.

But the conclusion of the EU-China comprehensive agreement on investment is facing an uphill ratification process amid diplomatic tensions between Europe and China over Beijing’s repression of democracy in Hong Kong and the Uyghur minority in the Xinjiang region.

Dombrovskis also pointed out that the status of China as a developing nation in the WTO, with the advantages it provides, needs to be addressed because it is “not really credible”.

In addition, he said that Europe will continue to bolster its defense toolkit to deal with unfair practices by third countries.

On 5 May, the Commission will put forward a proposal to tackle the unfair advantage of subsidised foreign companies in the internal market eyeing China’s buyouts in Europe.

By the end of the year, the EU executive will also present a new anti-coercion tool. Meanwhile, EU member states are still trying to reach an agreement on a proposed international procurement instrument aimed at opening up the multi-billion global procurement market to European countries

Pfizer to supply 4.5 mln doses of COVID-19 vaccine to South Africa by June