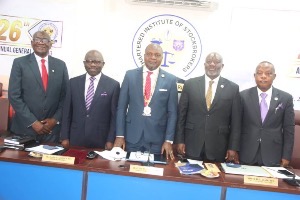 By Itohan Abara-Laserian
Lagos, April 29, 2021 The Council of Chartered Institute of Stockbrokers (CIS) has endorsed amendments to four rules to strengthen its corporate governance.

Mr Olatunde Amolegbe, the institute’s President, disclosed this in a statement made available to newsmen on Thursday in Lagos.

Amolegbe said that the rules, which were unanimously approved during the Institute’s hybrid AGM, include CIS Membership Rules and Regulations, 2021 and CIS Code of Ethics and Standards of Professional Conduct for Stockbrokers, 2021.

Amolegbe said that as critical professionals in the financial market, there was the need to adhere to the principles of corporate governance.

He said that a special committee was set up to review the rules in line with the current realities in the global financial market, and it was considered and approved by the Council.

“At the Institute, we are doing what we can to promote Corporate Governance. The tenets of our industry is based on trust and integrity because we are dealing with investors and building confidence.

“We must espouse Corporate Governance, not only to our members, but to the people managing those companies which we trade their stocks in as securities professionals.

“Corporate Governance is an integral part of the work a stockbroker should do. Clearly, it is not something we can ignore. We must remain professionals in the discharge of our duties.

“If one stockbroker does something wrong, it is easy for people to link such act to every other person,” said Amolegbe.

The president also reviewed the Institute’s performance for last year, saying that despite the impacts of COVID-19 pandemic and macroeconomic vagaries on its operations, it remained resilience.

The Institute commenced Group Life Insurance Policy for its members in good financial standing to the tune of N1 million. This we believe will provide succour to families at a time of need,” he said.

Amologbe said that many activities had been initiated to sustain the Institute’s operations in 2021 as members commended the efforts of the Principal Officers and Management in the review period.

The statement indicated that some members had been re-elected to the Council: Alhaji Umaru Kwairanga, Mrs Elizabeth Ebi, Mr Gabriel Akinyemi and Mrs Lilian Olubi.

It also said that Mr Dipo Adeniran and Mr Peter Akingbade were elected to the Council.