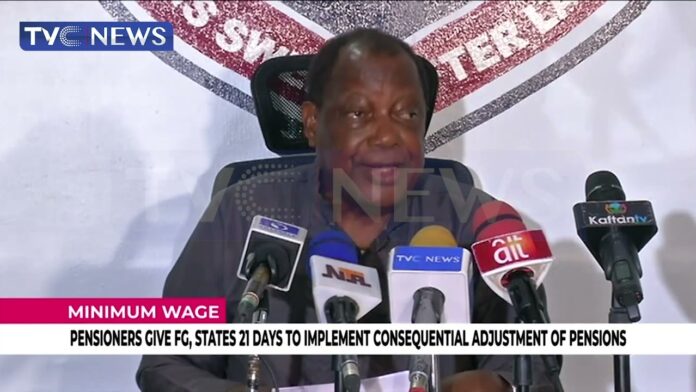 By Chiazam George, Ugochukwu Olive
Abuja, May1, 2021 The Nigeria Union of Pensioners (NUP) has lauded the Federal Government on the approval of implementation of the consequential adjustment of the new National Minimum Wage for pensioners in the country.
The NUP President, Mr Godwin Abumisi, gave the commendation in an interview with the News Agency of Nigeria (NAN) at the 2021 Workers’ Day celebration on Saturday in Abuja.
The theme for the celebration is “COVID-19 Pandemic, Social and Economic Crises: Challenges for Decent Jobs and Peoples’ Welfare”.
NAN reports that on April 22, the Executive Secretary of Pension Transitional Arrangement Directorate, Dr Chioma Ejikeme, announced that President Muhammadu Buhari had approved the implementation of the consequential adjustment for pensioners.
The Federal Government approved adjustment in pensions of retirees under the defined benefit pension scheme arising from the implementation of the New National Minimum Wage Act 2019 will take effect from April 18, 2019.

“We are happy with the Federal Government now, because it has approved the consequential adjustment of our portion as regards the new minimum wage.
“So, we want to use this opportunity to commend the Federal Government for putting smiles on the faces of the pensioners in the country,’’ he said.
He, however, noted that pensioners all over the states were still facing some other challenges which include irregularly payment of their pensions among others.
He, therefore, called on Mr President to intervene in the issue.
“We are supposed to be paid our pension on a regularly bases but rather it is difficult for our members to be paid in the most of the states.
“That is why we also want Federal Government to listen to our plight,” he said.
Also, Mr David Ohuo, a pensioners, told NAN that their members found it difficult in receiving their pensions.
According to him, what the pensioners are going through accounts for the high rate of corruption and it is time to take the bull by the horn.
“Many people would not want to retire because outside service there is serious battle to survive,” Ohuo said.

No DBS pensioners will be left out of consequential adjustment – PTAD