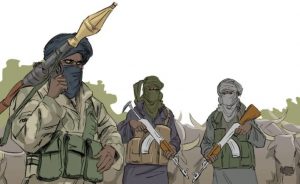 notorious terror kingpin operating around the Dansadau axis of the vast Kuyambana Forest, Ali Kachalla, is the one responsible for the recent shooting down of a Nigeria Air Force (NAF) Alpha Jet, Daily Trust reports.

When the military jet was downed through the use of heavy artillery power on June 18, no details were available about the incident from both official and unofficial sources and nothing much came out after then.

Therefore, the gang of bandits responsible for the shooting down the jet was not known.

But talking to locals, security personnel and other persons with the understanding of happenings in the areas troubled by rural banditry, the newspaper gathered that Ali Kachalla, a shrewd terrorist with hideout in Kuyambana masterminded the operation.

Kachalla, originally a chieftaincy title in the Kanuri language, is widely used as an honorific for bandit leaders in the North-West.

The fighter jet was brought down by men of Kachalla’s gang near Kabaru village, located some 15 km west of Dansadau town.

According to the report, Ali Kachalla controls over 200 armed men in Kuyambana Forest and has carried out a series of brutal attacks on communities in the district.

He is said to be known to take special interest in ambushing military personnel.

Those who know him said he was born in Madada, a hamlet near Dansadau to a family of herders. He is said to be in his early 30s.

Kachalla’s current base is located along the bank of a river called River Goron Dutse, which is about 25 km south of Dansadau town.

Goron Dutse River is situated across the Kaduna – Zamfara boundary, with parts of it in Kaduna State and the other part in Zamfara State.

“His settlement consisting of several strings of thatched huts is on Birnin Gwari side of the river. But, his large herd of cattle being manned by his heavily armed boys is based in Zamfara State,” the newspaper quoted a source in the area as saying.

“As I’m talking to you, his boys can be found in Dandalla, Madada and Gobirawa Kwacha communities. The villages are all situated southeast of Dansadau town. They are all being controlled by the armed men.”

Kachalla’s men are described as “fearless fighters” and have been laying ambush for security operatives for quite a long time. His gang members are said to outnumber most of those in other gangs in the area.

In recent times, Kachalla has stepped up attacks on Dansadau town to protest the blocking of supplies to him from the town and the villagers’ help in the escape of the military pilot who he wanted to capture alive. In one of the attacks, his men set an Armoured Personnel Carrier ablaze, after chasing security forces deployed to the town.

“Dansadau community has drawn the ire of Kachalla and his boys after local traders were blocked from selling food to him,” one source said.

“There are some unscrupulous elements among the local traders who still take bread, soft drinks and other groceries to the bandits in the forest.”

Despite his rise to prominence as a result of the men and arms cache he controls, Ali Kachalla remains a shadowy figure, making it difficult to get any picture or video clip of him.

While some bandits’ leaders are known to interact with locals and even visit markets in some areas, Kachalla and most key bandits operating around Kuyambana stay away from any form of direct interaction with the outside world.