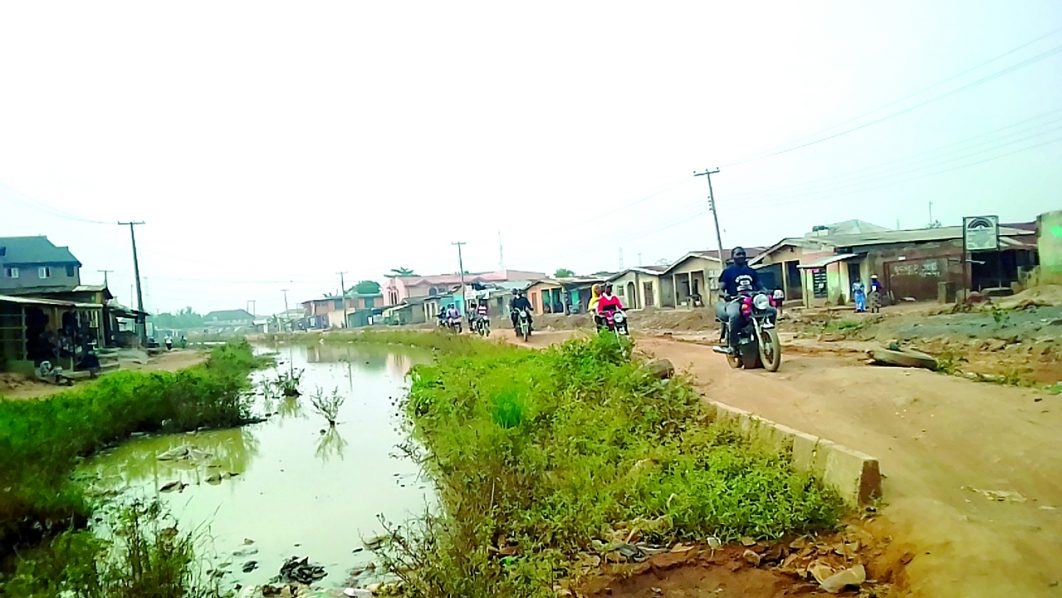 Residents of Olu-Odunaiye Ikija town, Agbado, IjaIye, Ijoko, and Ogba Ayo have implored the Ogun State and Federal governments to come to their aid and finish the construction of the Agbado/Ijoko/Akute road.

The road starts from Sango and leads to the Berger area of Lagos.

Aside from the sufferings and inconveniences, residents are experiencing due to the road’s deplorable condition, the economy in the axis is reported to be at the lowest ebb, making life almost unbearable.

Residents and stakeholders believe that after completion of the strategic road, which was started by the immediate past administration in Ogun, an appreciable development will be attracted to the corridor, while the perennial traffic between Sango and Oshodi will also be reduced.

When the residents realised that the state government was not about to respond to their petitions and visits, they decided to take their fate into their hands. They embarked on the private funding of a road, which they have clearing and grading of a road from Ogba Ayo to Oke Aro. Already, the project has gulped as much as N4m, which was donated by individuals.

Recently, there was a stand-off between the residents and workers of the CCECC construction company, which is undertaking the building of railway stations along the corridor. The residents were irked by the company’s seeming nonchalance and refusal to contribute its quota to their efforts at clearing and grading a passable road to alleviate the sufferings of commuters and motorists plying the route. This is especially so, considering the fact that the construction company’s heavy-duty vehicles and articulated trucks contribute in no small measure to the worsening condition of the road.

The Baale of Olu-Odunaiye Ikija town, High Chief Olufemi Olusunmade Odunaiye, told The Guardian that the neglected road has been brought untold hardship and made life unbearable to his people.

He said: “They promised to construct the road, which they actually started and later abandoned. The construction started during the tenure of former Governor Ibikunle Amosun but was abandoned when his tenure ended. We had hoped that the new governor, Prince Dapo Abiodun would continue from where Amosun stopped, but we have been proved wrong. And though they made several promises, they never fulfilled any of them.

“We have written series of letters and have also paid visits to relevant government officials, with no response. They promised to come and do some sort of palliative work for us so that at least the road would be a little motorable, but we are yet to see that promise fulfilled.

“When we did not see them, we had to call on the Baales and community leaders to decide what we should do to our plight. Many people also donated money with which we started the palliative work. We bought sand and hardcore to fill one of the swampy sides of the road to enable us a link with other communities and allow transport and other vehicles to come in.

As we are tasking ourselves for the work, it is nauseating that CCECC, the Chinese construction company in charge of the railway from whom we even buy sands, and hardcore who are to support us in the spirit of corporate social responsibility refused to support us. We even wrote letters to their Kajola, Papalanto among others. Our letters dated 3rd and 19th July 2021 were acknowledged by them, but up till today, there has been no response.

We are being frustrated as the little effort we are making is being rubbished by their vehicles that have no other access road to their site than this road. This is the reason we are carrying out this peaceful protest. They bluntly refused to render assistance and they treat our plight with impunity as if there is nothing we can do. We are showing our grievances for the entire world to know what is going on so that appropriate authorities too would also come to our aid.

Though the road was not contracted to them, we believe it behooves them to come to our aid and assist us in the palliative work we are carrying out since it is the only road to access their site. In fact, the effect of their heavy truck passing the road has not enabled transport vehicles to make use of the road, therefore rendering our effort useless. We are not fighting anybody as we are a peace-loving community, but since they have refused to respond to the letters written to them, we are compelled to make them comply by force.

This is Agbado Ijoko, Akute road which starts from Sango and leads to Berger. Ripple effect of the bad and unmotorable road is numerous. Businesses have been paralysed. Those that are buying and selling have been rendered inactive as there is no road for them to go and buy what they are selling. Trucks that are bringing goods have no road to ply. A lot of goods being brought had been wasted and perished inside water. A lot of perishable goods were lost to the water log created by the bad road. Vehicles bringing in goods have always been at the mercy of miscreants who took advantage of the bad roads and vandalise their vehicles.

Landlords too have their own share of the sufferings as their tenants have vacated their buildings due to lack of road to access their places of work from this axis. Some landlords have also sold their houses and relocated. If not for the few of us that are still remaining, this environment would have been a ghost town because there is no trade. Commercial and private vehicles that are supposed to come here look for alternative roads.

This is what we are going through. If our government is sensitive enough, appreciate our plight and know their responsibility, completion of this road is also for their good as new bussnesses would spring up, banks would be able to operate and wholesale businesses with depots would be established. This will also lead to the improvement of the State government’s IGR. It is unfortunate that they refuse to see things in this perspective. Frustration of the people in this axis have made them to succumb to any idea that would even bring in private partnership and would not mind to be paying toll gate at the end of the day since the government cannot care for the people who are paying them taxes.

Chinese response to our course would be welcomed if they are ready to complement our effort.

We have alerted a lot of government functionaries including Commissioner for Works and Infrastructures, Information, Physical Planning and Special Adviser to the State on Works” the Baale said.

Another resident, Iyalode of Olu-Odunaiye, Ikija town, Chief Mrs. Esther Adebimpe said many people have vacated the area because of the condition of the road that has cut them off from other towns in the axis.
“Since about six months, the road has been terribly bad and we pay motorcycle riders between N200 or N300 from here to Agbado who move on the media with port-holes.

“We always hold our breadth on the motorcycles who occasionally fall into mucky water that had taken over one side of the road. There is no trade. We are hungry.

“There was a day a child had fire accident and his body peeled. There was no road for any vehicle to carry the child to the hospital. He eventually died. Many like that had passed away. Whenever any pregnant woman is in labour which would occasion carrying her to the hospital, there would be no way.

“We are pleading with the government and the Chinese people whose vehicles alone make use of the road we are contributing money to make passable to all come to our aid,” she said.

Another woman who also spoke to the Guardian, an entrepreneur, Alalade Olutayo said she built her house in the area about five years ago.

“When the construction started during the tenure of Senator Ibikunle Amosun, we were glad. However, he demolished some houses here and refused to compensate the owners which eventually led to the death of many landlords.

“When I relocated here after completing my building, I came with three cars, but today, I cannot boast of one. There was a time I relocated but on second thought, I came back for the fear of what would become of the building in the long run.

“Houses are empty, businesses have died and no shop owners could boast of generating N2,000 or N3,000 per day because of the situation of the road.

We are having this peaceful demonstration for Chinese whose vehicles pass the road we are trying to make passable for transport vehicles to come in, to come and assist us” she said.

A hotelier, Akinlade Ejiwunmi said the hotel business that was supposed to be booming had paralysed.

“In fact, the entire businesses are down. Landlords are selling their houses to move away from this environment.

“We are calling on the government and Chinese people to come to our aid. Politicians should know that they would soon need us and if they refuse to help us now, there will be a kind of reprisal by the time they also need us” he said.

According to the Public Relations Officer, Agbado/Ijoko Areas Communities Consultative Forum registered under Ifo Local Government, Comrade Akorede Idowu, when the Spokesperson for CCECC in the axis, Lanre, was contacted, he said he did not have the power to give out any sand to the community to assist in the palliative work.