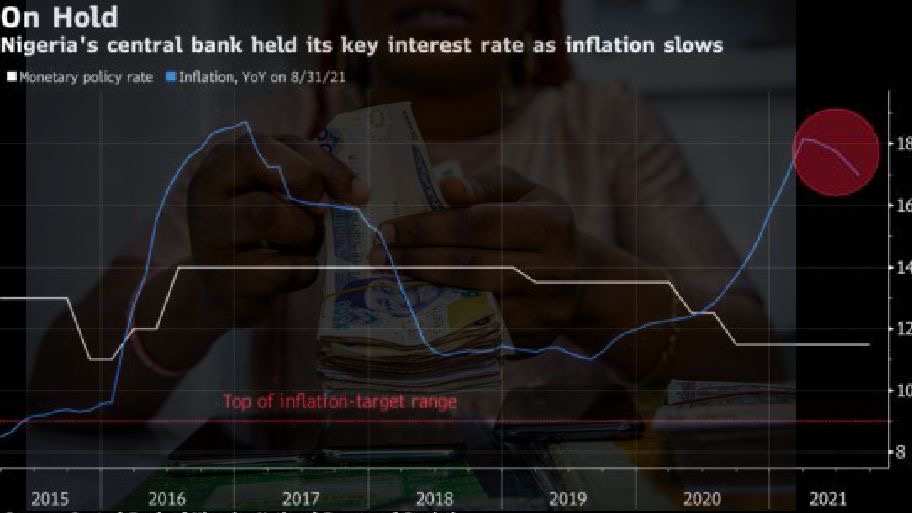 Nigeria’s central bank left its key interest rate unchanged to support an economy that expanded at a slower pace than expected in the second quarter.

All 10 members of the monetary policy committee who attended its two-day meeting voted to keep the rate at 11.5% for the sixth straight meeting, Governor Godwin Emefiele said Friday in a virtual briefing from the capital, Abuja. That matched the forecast of all eight economists in a Bloomberg survey.

Emefiele has previously said the MPC can only shift to fighting inflation once the economy’s recovery from last year’s coronavirus-induced contraction gains momentum.

While the economy grew 5.01% in in the three months through June from a year earlier, the biggest such expansion since the fourth quarter of 2021, it undershot economists’ forecasts.

The MPC now sees growth averaging 2.86% in 2021, down from a forecast of 3.15% in July and compared with the International Monetary Fund’s 2.5% prediction.

Inflation, which has exceeded the 9% top of the central bank’s target band for more than six years, slowed to a seven-month low of 17% in August. The central bank sees price growth continuing to moderate, Emefiele said.

Stronger economic growth and a slowdown in inflation are vital to reducing poverty in Africa’s largest economy, where population growth has outstripped that of gross domestic product since 2015 and more than 40% of Nigerians live below the nation’s poverty line of 137,430 naira ($333) per year.