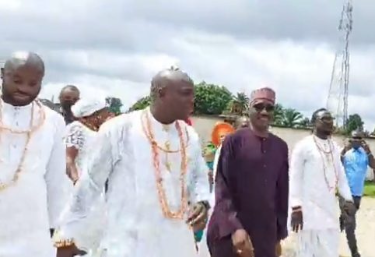 Port Harcourt — Traditional Rulers in the Niger Delta have said that the region has been shortchanged in the scheme of things, following the refusal of the National Assembly to earmarked 10percent as host community funds in the Petroleum Industry Act.

The Monarchs disclosed this during a visit of the Group Managing Director of NNPC, Mallam Mele Kyari, to the palace of the Pere of Gbaramatu kingdom in Oporoza, Warri South West LGA of Delta State.

The Monarch explained that alloting only a paltry 3percent for a region whose resources was feeding and sustaining the entire country was unpalatable and unacceptable, while urging the NNPC boss to intervene on the issue.

“The 3percent funds for host communities in the Act is grossly inadequate. The royal fathers and the entire Niger Delta have apoken. The least we had expected was 10percent.

“The House of Representatives indicated 5percent but when the joint House met, even the 5percent was jettisoned for 3percent.

“We have fought dearly for peace in the Niger Delta region and so for a people to sit in Abuja in the comfort of their offices and dish out things that are not palatable to a people that have kept this country together, and also feeding this country for years is very unpalatable.

“It is on that note that the royal majesties in the Niger Delta feel that we have been shortchanged. So we plead with you (Kyari) because you can make input on our behalf.”

Also, the Ovie of Idjerhe Kingdom, H.R.M King Monday Obukohwo Whiskey, said that President Muhammadu Buhari means well for the country but added that thr problem was those implementing his polices.

King Whiskey regretted that the issue of the Nigerian Maritime University in Okerenkoko has been politicised.

“I know that you (Kyari) came here to see things for yourself. Our brother GMD our people are suffering and it’s not supposed to be so. Let your media department in NNPC take visuals of communities in the Niger Delta and see whether we are actually part of this country.

“The companies operating here regard us as slaves. I have Seplat operating over 20 oil wells in my kingdom, but I am happy to report to you that I have 18 people working in Seplat and they are all contract staff.

“We have our children with Masters and PhD degrees in management, geology, geosciences and engineering, what other certificates do you need?

“Our people are suffering, see what you can do to ameliorate the plight of our plight. So you can open a new page in the region, a page of equity, fairness and justice.”

Responding, the Group Managing Director of NNPC, Mele Kyari, admitted that there are development needs in the Niger Delta that were yet to see light of day.

Kyari said his visit to Oporoza was to show appreciation and pay homage to Gbaramatu kingdom and to the Izon nation.

“I am very much aware of what is happening in the Niger Delta; that promises were made by Mr President to the Niger Delta and by implication to the Ijaw nation, and these promises have not seen the light of day.

“I do not know the specifics of these promises, but let me say one thing, the issue of host communities was the baby of Mr President.

“Your Royal Majesties, I am privileged to know that Mr President is concerned that every intervention that is done to bring development, prosperity and peace to the Niger Delta in the last 30years hasn’t worked and the reason is that delivery has been the problem.”

Oil may hit $150 and a surge could ‘definitely escalate an inflation scare,’ says Jefferies