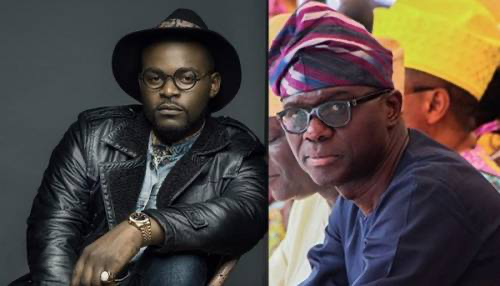 The Lagos State Governor, Babajide Sanwo-Olu, is plotting to organise concerts with celebrities to distract youths from participating in the EndSARS remembrance event.

Nigerian rapper, Folarin Falana, popularly known as Falz, made the allegations in a social media post on Friday.

Popular Instagram comedian, Debo Adedayo, also known as Mr. Macaroni, had earlier taken a swipe at celebrities for accepting Sanwo-Olu’s invitation to perform at a concert meant to hold days before the Lekki shooting anniversary.

Macaroni, who rebuked celebrities for refusing to speak up against the government’s move to quell planned #EndSARS memorial events, charged them to rethink their association with the government.

Falz alleged that the Lagos State governor planned to use the concert as a distraction to prevent the youths from participating in the EndSARS memorial event.

He noted that the police were already at the Lekki tollgate to restrict Nigerian youths from exercising their fundamental human rights.

“As I type this, there is already a HEAVY police presence at the Lekki toll gate. Best thing they could come up with is organising “concerts” to try and distract us from remembering the real heroes in all of this. The people they murdered,” the music star in an Instagram post said.

Falz, who insisted that the youths would not be silenced, lamented that justice was yet to be served to individuals that suffered brutality in the hands of the police before, during and after the #EndSARS protest.

Falz’s social media post followed Landmark Event Centre’s refusal to allow its premises to be used for the “SoroSoke” summit, an event put together to mark the one year anniversary of the Lekki tollgate shootings.

Tagged Sorosoke Summit, the event was expected to hold on at the venue on October 20, 2021 to commemorate the first anniversary of last year’s #EndSARS protest and honour the lives of protesters who were killed or injured during the demonstration, especially at the Lekki Toll Gate in Lagos.

The keynote speaker billed to grace the event is the Ooni of Ife, Oba Adeyeye Enitan Ogunwusi Ojaja II.

However, the event, which was billed to start by 11.30am Wednesday, October 20, 2021, has been cancelled by the management of the event centre.

About the planned event, Banks Omisore had earlier tweeted, “We need to have honest conversations of the event surrounding 10/20/21. @OoniAdimulaIfe will be the keynote speaker.

“What really happened? Who opened fire? Did people die at Lekki toll gate? Who was responsible? What happened to the #5for5 demands? Is #EndSARS still an issue?”

However, the organisers of the event have noted that the cancellation by the event centre will not stop them from going ahead with it.

“We invite everyone to come to LekkiTollGate for the memorial,” one of them told SaharaReporters.

On the night of October 20, 2020, Nigerian soldiers opened fire on peaceful #EndSARS protesters at the Lekki Toll Gate, killing an unspecified number of people and injuring many others.