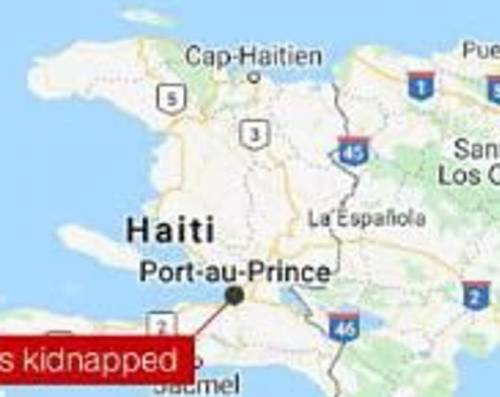 The incident occurred on Saturday.

The source said more information would be available on Sunday as investigation is ongoing.

The missionaries were travelling by vehicle Saturday to Titanyen, north of the capital Port-au-Prince, after visiting an orphanage in the Croix des Bouquets area. They were abducted along the route between the two places.

According to CNN, it reached out to the Haitian Justice Ministry and the National Police but got no comments.

An Ohio-based Christian aid group called Christian Aid Ministries confirmed the missionaries and family members abducted in Haiti are affiliated with it, according to a report in the Washington Post.

The report quoted a minute-long “prayer alert” from the organisation and a person familiar with the abduction.

The “prayer alert” obtained by the paper stated that “men, women and children” associated with the group were being held by an armed gang.

The minute-long recording confirms those abducted include organisation staff as well as family members who were returning from a site visit to an orphanage in Haiti, according to the report.

“The mission field director and the American embassy are working to see what can be done,” the voice on the recording stated, the Washington Post reported. “Pray that the gang members will come to repentance and faith in Jesus Christ.”

CNN said it had reached out directly to the Christian Aid Ministries via email and through the number listed on their website, but had yet to hear back.

One of the abducted missionaries, an American citizen, also posted a call for help in a WhatsApp group as the kidnapping was occurring, the Washington Post reported, quoting a person familiar with the abduction who spoke on the condition of anonymity.

“Please pray for us!! We are being held hostage, they kidnapped our driver. Pray pray pray. We don’t know where they are taking us,” the message said.

CNN said it could not independently verify the authenticity of the message or the report.

A spokesperson for the US State Department said late Saturday it was aware of the reports.

“The welfare and safety of US citizens abroad is one of the highest priorities of the Department of State. We are aware of these reports and have nothing additional to offer at this time,” the spokesperson said.

Kidnappings have surged in Haiti throughout 2021, with numbers rising nearly 300% since July.

At least 628 kidnappings have taken place since January, of which 29 are of foreigners, according to data released earlier this month by the Center for Analysis and Research in Human Rights, a non-profit based in Port-au-Prince.

Earlier this month, Haitian Foreign Minister Claude Joseph called on the United Nations Security Council to strengthen the mandate of the UN special political mission in his country to help ensure security and protection for civilians, according to a UN news release.

“These are the legitimate expectations of the people who have suffered enough from gang violence, kidnapping and widespread crime,” Joseph said.

Ecuador demonstrators block some roads in protests over gasoline prices