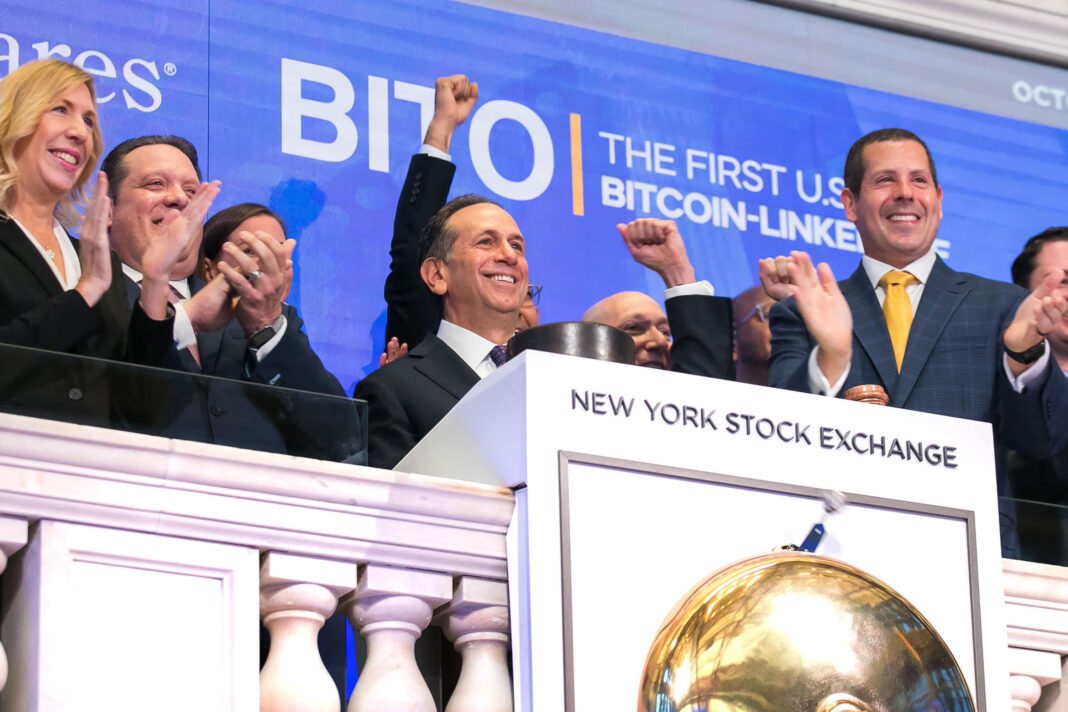 The ProShares Bitcoin Strategy ETF, ticker “BITO,” jumped more than 3% to $41.44. The fund tracks CME bitcoin futures, or contracts speculating on the future price of bitcoin, rather than the crypto itself.

That means investors in the ETF should expect the price and performance of the shares to differ somewhat from the price of bitcoin itself. This isn’t ideal for existing investors; many of them take a long view on cryptocurrencies and had hoped for an ETF that would track physical bitcoin that investors could buy and hold.

The price of bitcoin briefly popped Tuesday morning after trading began, jumping 3% to $63,035.04, according to Coin Metrics, nearing its all-time high from April 14 of $64,899. Bitcoin futures gained about 2% as well.

“The fund seeks to provide capital appreciation primarily through managed exposure to bitcoin futures contracts. The fund does not invest directly in bitcoin,” the ProShares website says of the fund. The fund has an expense ratio of 0.95%.

ProShares is the eighth-biggest ETF provider by assets, according to ETDB.com. The firm is known for its funds that use leverage to track moves in certain indexes multiplied by a certain amount. ProShares executives rang the opening bell at the NYSE, where the ETF trades.

The crypto industry has been longing for a bitcoin-related ETF for many years. In about 2017, asset managers began applying to launch spot bitcoin ETFs but their proposals were rejected by the Securities and Exchange Commission, which maintained none were able to prove market resistance to manipulation. The rush of applications for futures-based ETFs came this year shortly after Chairman Gary Gensler took the helm of the agency.

“What you have here is a product that’s been overseen for four years by the U.S. federal regulator CFTC, and that’s being wrapped inside of something within our jurisdiction called the Investment Company Act of 1940, so we have some ability to bring it inside of investor protection,” Gensler said of the new ETF on CNBC’s “Squawk on the Street” on Tuesday. “It’s still a highly speculative asset class and listeners should understand that underneath this, it still has that same aspect of volatility and speculation.”

Some argue the impact of an ETF, particularly one tied to futures contracts, is lessened by adoption of crypto by companies and fintechs. Investors have many ways to get indirect exposure to bitcoin without actually owning it, through institutional-grade funds, financial apps like PayPal and Square’s CashApp, or crypto-related equities like Coinbase and mining stocks.