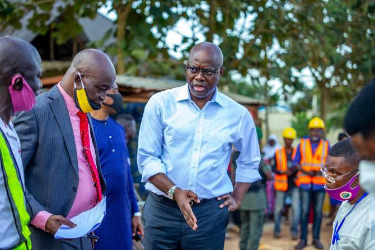 In his newsletter of September 23, 2021, HE, Governor Seyi Makinde made this statement, “I am not politically naïve. I am aware that not everyone is my friend or supporter, nor will everyone identify with me, no matter my good intentions. I rather see myself in the same position as brilliant students who are the teacher’s pets. They often face bile from people who are performing too poorly to get the teacher’s attention.”

Indeed, His Excellency is facing bile. They tried to distract him with insecurity; he has shown himself up to the task. Then they went ahead to exaggerate every occurrence in the state. For example, they shared pictures of a flooded stadium in England and tried to pass it off as the Lekan Salami Sports Complex, Adamasingba, Ibadan. The people were vigilant enough to catch them in this lie.

Now, as the commissioning of the Challenge Bus Terminal draws closer, they have started with a new set of distractions. Best believe that people who base their opposition on lies and disinformation will always leave pain in their wake. These days, they pretend they like the people of Oyo State so much that they are calling attention to ‘bad roads’.

Meanwhile, when their favourite was in power, they did not hold him to account for even the barest minimum. We did not see them writing endless threads on Twitter regarding the same set of roads. We did not see them calling on people to supply the list of bad roads in their community.

For example, how many of these Road Construction Vigilantes helped the people of Apete crusade under the eight years of their darling APC. None of the roads they are referring to as ‘bad’ now was anything like the abandoned Apete-Awotan-Akufo Road. The road was allegedly abandoned because the people in that community did not vote for the present opposition. Today, the 12km Apete-Awotan road is almost done. It is the first concrete road constructed in Oyo State.

It is easy to create lists, but it is better to look at the history behind the listed roads. The serial critics cannot answer the question: Did these roads suddenly go bad in the last two years? For example, the Nihort-All Saints College-Ita Faaji-Wire and Cable Road, which they have complained about, has been bad for several years. In fact, in 2018, the immediate past government announced that the road had been approved for rehabilitation. But it was not rehabilitated.

These critics have not realised that they are shooting themselves in the foot and exposing how terrible they were in governance. If ALL the roads in Ibadan are bad in just two years, it means that the “Architect of Modern Oyo” did a shoddy job, and his work needs re-engineering. The Engineer is here, and he is already doing a great job in all sectors.

While our sudden activists try to cry more than the bereaved, the Ministry of Public Works, Infrastructure and Transportation has swung into action and started carrying out short term palliative works on some of the worst-hit roads in Ibadan. They have promised to do more long-term repairs once the rains are over.

Of course, it is the constitutional right of citizens to make their voices heard. To speak out when they think the government is not doing well enough. But, honest citizens are not blind to the good government is doing while focusing on the bad. HE, Governor Seyi Makinde is following the Roadmap to Accelerated Development in Oyo State, 2019-2023. The good people of Oyo State are reaping the dividends of democracy in every sector.

They can rest assured that their goodhearted governor, who provided various platforms to give feedback to the government, is listening and will act. Keep the honest feedback and criticism coming!