Mass protests held in Sudan against prospect of military rule 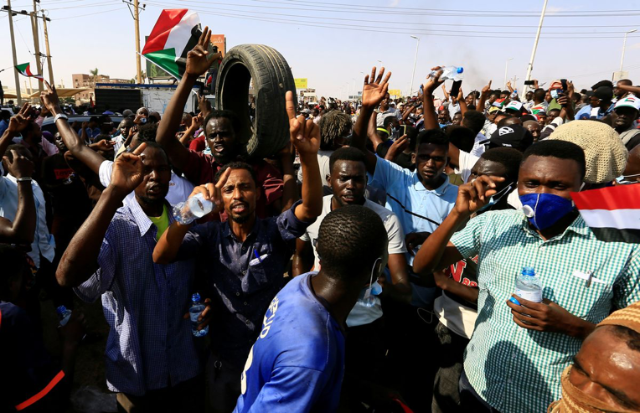 KHARTOUM, Oct 21 (Reuters) – Huge crowds of people marched in several parts of the Sudanese capital and other cities on Thursday in demonstrations against the prospect of military rule, as the crisis in the country’s troubled transition from authoritarian rule deepened.

The military has shared power with civilian parties in a transitional authority since the removal of President Omar al-Bashir in 2019 in a popular uprising after three decades of his rule.

A coalition of rebel groups and political parties have aligned themselves with the military, which has accused the civilian parties of mismanagement and monopolising power, and they are seeking to dissolve the cabinet.

Civilian leaders say that this would amount to a coup and that the military aims to install a government it can control.

Thursday’s protest, which began at midday and continued after sundown, took place on the anniversary of the 1964 October Revolution that overthrew a military government and led to a period of parliamentary democracy.

It was preceded by days of smaller neighbourhood protests.

Reuters journalists estimated the number of participants to be in the hundreds of thousands, making it the biggest demonstration of the transition.

Plumes of smoke could be seen across Khartoum as protesters burned tires and waved Sudanese flags.

Report ad
Many chants were critical of the head of the ruling Sovereign Council, General Abdel Fattah Al-Burhan, accusing him of being loyal to Bashir. Some demanded he hand over leadership to civilians and others demanded his removal.

“This country is ours, and our government is civilian,” one chant said.

The Central Committee of Sudanese Doctors said 37 people were injured in the protests, which it blamed on government forces, including four gunshot victims.

State television said police used tear gas and live bullets to break up protests in front of the parliament building in Omdurman.

In a statement, police said rogue protesters in Omdurman set a police vehicle on fire and attacked police officers, shooting two. Officers then used a “legal amount” of riot control to disperse the crowd, it said. Eyewitnesses said protesters were tear gassed heavily.

Several government ministers and officials were seen marching in different parts of Khartoum.

“October 21 is a lesson for any tyrants, loyalists, or opportunists deluded into thinking they can turn back the hands of time,” wrote civilian Sovereign Council member Siddig Tawer.

Neighbourhood resistance committees said in a statement they were protesting against the entire power-sharing agreement and demanded sole civilian rule.

Many businesses in central Khartoum were closed in anticipation of the protest and there was an extensive police presence.

The military says it is committed to the transition to democracy and elections at the end of 2023.

Prime Minister Abdalla Hamdok, who leads the cabinet under a military-civilian power-sharing agreement, remains popular despite an economic crisis. He has said he is speaking to all sides in the crisis in order to find a solution.

In a statement Thursday evening, he said he saluted the protesters, saying “the crowds have made their voices heard and delivered their message that there is no going back from the goals of the revolution.”

Report ad
Military-aligned groups led by rebel group leaders and current government officials Minni Minnawi and Jibril Ibrahim have held a sit-in in front of the presidential palace in downtown Khartoum since Saturday.

Protest routes were planned in other areas of the city to avoid a confrontation with the sit-in.

“We encourage demonstrators to be peaceful and remind them of the strong U.S. support for Sudan’s democratic transition,” the U.S. Embassy wrote on Twitter.