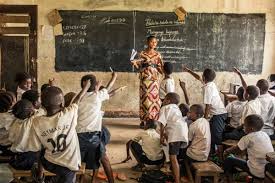 KINSHASA, Oct 21 (Reuters) – Hundreds of school children stormed Democratic Republic of Congo’s parliament on Thursday demanding the government raise teachers’ pay and end a strike that has shut down lessons for more then two weeks.

Pupils in their uniforms waved branches and chanted “We want to study” and “If we don’t study, we will resort to drugs”.

Teachers went on strike at the start of the school year on Oct. 4 over salaries, bonus pay, retirement age and other issues that have arisen since President Felix Tshisekedi launched a flagship free primary school programme in 2019.

“It’s already been two weeks that we’ve not been studying. Our teachers are on strike. When we ask them to teach us they say no, they won’t teach us until next year,” young protester Emerod Eraza said.

Report ad
“So we marched here to complain in front of the authorities.”

The children were received by the vice president of parliament, Jean-Marc Kabund-a-Kabund, who told them: “Your place is not in the street, but in school or at home.”

The government has accused the leaders of religious groups, who run around 80% of public primary schools, of being behind the strike, allegations they deny.

“It is worrying when politicians and churches think they are settling the scores… by turning schools into a political football,” Cecile Tshiyombo, the head of teachers’ union SYECO, told Reuters.

Report ad
Costing more than a billion dollars per year, the free primary school initiative kicked off in September 2019 with financial backing from the World Bank.

In August, the lender said it was too early to tell if the programme was a success, but pointed to the enrolment of an additional 3 million children as a sign of progress.