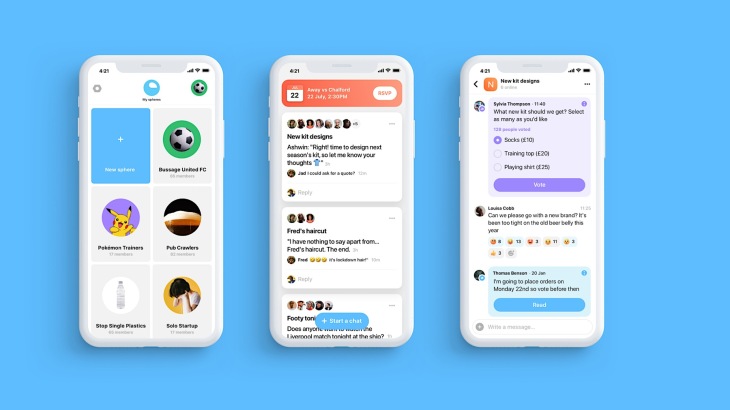 Twitter on Thursday (Oct. 21) acquired chat app Sphere for an unspecified amount, according to a CNBC report cited by Engadget, which notes Sphere is “winding down” the platform in November.

The acquisition will accelerate the development of direct messages, communities and creators on Twitter, according to Engineering VP Nick Caldwell, although he didn’t give details on exactly how that growth and expansion of Twitter’s offering would happen — or when.

Sphere, which highlights “essential” messages and eliminating clutter from users’ social media feeds, was founded by serial entrepreneur Nick D’Aloisio. He sold Summly to Yahoo when he was 17 and now will bring his staff of 20 employees under the Twitter umbrella.

Twitter, which has focused lately on improving its direct messaging functions and enhancing users’ ability to form communities and create unique content for the platform, could now add Sphere’s community features across its offering to help it compete with Instagram and other social media apps that use private messaging and attract influential figures to grow their profiles.

Twitter launched a beta version of the iOS Tip Jar for content creators in May and it could soon accept bitcoin gratuities. Users can already use Bandcamp, Cash App, Patreon, PayPal and Venmo for their tips.

The rise of social commerce is also presenting some challenges for brands, Yuval Ben-Itzhak, president and chief strategy officer at Emplifi, told PYMNTS last month, including keeping track of inventory, pricing and shipping across the myriad shops and social marketplaces where products are sold.

In September, Emplifi unveiled a new set of social commerce tools, including one called Shop Sync that integrates with Facebook Shops and Instagram Shops to track inventory and help brands to scale, aimed at solving this problem.

Also last month, TikTok announced a new full-service shopping solution where the social media company will manage everything for merchants, including shipping and point of purchase and will debut a TikTok Shopping API later this year so businesses can integrate their product catalogs into the app.