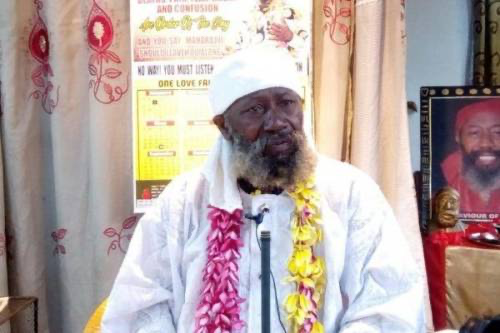 Founder of the One Love Family, Satguru Maharaj Ji, says the #EndSARS protest is a consequence of the Nigerian government’s refusal to listen to people’s cries.

Maharaj Ji said the #EndSARS movement is more than a protest, stating that it is a call for the Nigerian leaders to rise up and bring about a positive change in how they pilot the affairs of the country.

He noted that many Nigerians have been killed by members of the Special Anti-Robbery Squad (SARS) and other units of the Nigeria Police Force, adding that it was time to reform the sector.

The spiritual leader also urged the Nigerian government to immediately fix the economy of the country, citing hardships, unemployment amid other factors which sometimes push young people to crime.

He said, “#EndSARS came as a result of the Nigerian government’s refusal to heed to the call of the people. We speak as Nigerians who have been exposed to the same light.

“It is more than a protest, it is a big warning to the Nigerian leaders to alter their cause for the good of all Nigerians in order for them and their unborn generation to escape the… of their protracted and stubborn misrule.

“It is time for a change. We want the leaders… So many Nigerians have been killed extrajudicially by SARS and wasted by other units of Nigeria’s broken police system.

“The politicians are involved, the academics are involved, fathers are involved. Young Nigerians have long been neglected, humiliated and with the attendant frustration of unemployment and poverty, which now drives them to find livelihood in such crimes as internet fraud.

“To find a lasting solution to this, the government needs to fix the economy and provide socio-economic incentives to the young Nigerians, motivations that will drive them to deliver their creative best in a positive way to the utmost benefit of Nigeria and to make Nigeria the paradise.

“We cannot blame the young people, all we need to do is take care of them. I don’t see why there should be gunshots, the police, Army was supposed to join them, dance with them. They shouldn’t be afraid. If any security personnel is afraid because they’re protesting, then they should have left, this is a democracy.

“Today, you have seen what is happening, police harassment, the religious killing of young Nigerians, all that is criminal. We support our youths. Today we have the light. Whatever it is, the government cannot stop the youths, the students, the doctors, the lawyers. We have suffered and sacrificed to make Nigeria great.”

He further stated that the way forward is for Nigerians to realise they need to start using the creator’s name as he invited young Nigerians to a Golden Age Festival programme which will be coming up at the temple very soon.

On Wednesday, youths across the country observed the first anniversary of the #EndSARS protest.

On October 20, 2020, Nigerian youths and other victims of police brutality rose to demonstrate against the excesses of a tactical police unit known then as SARS and other bad governance emanating from President Buhari regime.

Soldiers appeared in the evening of October 20 at the scene of the protest in Lekki and fired at protesters, resulting in deaths and injuries.