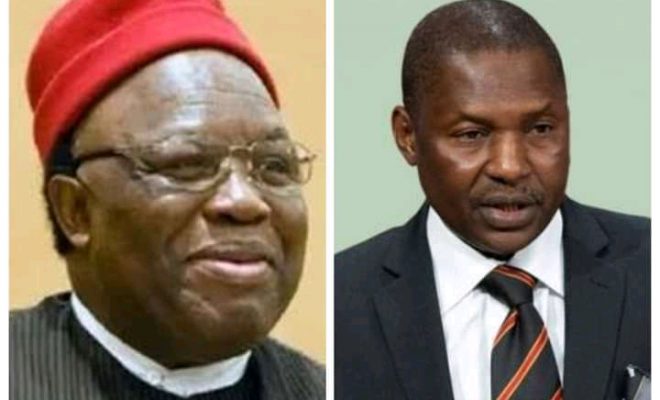 The Igbo socio-cultural organization, Ohanaeze Ndigbo, has warned the Attorney-General of the Federation and Minister of Justice, Abubakar Malami, over his alleged plot to lobby the deployment of the newly purchased Super Tucano fighter jets to the South-East region.

The caution followed a press conference by Malami where he mentioned security violations allegedly executed by the Indigenous People of Biafra (IPOB).

Ohanaeze described Malami’s statement as the latest attempt to justify the planned deployment of the fighter jets to the South-East zone where the IPOB was clamouring to break away from Nigeria.

Ohanaeze stated this in a release by Mazi Okechukwu Isiguzoro, the Secretary-General of the Chidi Ibeh-led Ohanaeze Ndigbo.

He said in the statement that “Malami is setting the stage for the justification for the deployment of the acquired Tucano Fighter Jets to the Southern part of country. The Federal Government has concluded the strategies to use the Super Tucano Fighter Jets in the South-East.

“We raising this alarm because it appears that there is a concluded plan to invade the Sout-East in the name of fighting terrorism but they should reconsider the lives of innocent civilians who are at risk of these plans.”

The Ohanaeze scribe wondered about the Nigerian Government’s delay in declaring bandits and Fulani herdsmen as terrorists.

He added that, “We are aware of the conditions attached to the acquisition of the Tucano Jets, which was limited to the Boko Haram terrorists in the North-East.

“What Malami is doing now is to convince the world that the IPOB is a terrorist organization and then unleash the jets on the South-East and totally annihilate the Igbos. This is totally unacceptable.

“We are calling on President Buhari not to deploy any Tucano Jets to the South-East. We believe that bandits that shot down Military Aircraft and shot at Abuja/ Kaduna train should be declared terrorists before any deployment to the South-East.”

Naija247news had gathered that part of the agreement between President Muhammadu Buhari Government and the United States before the acquisition of the jets was that they would be deployed against the Boko Haram terrorists in the North-East part of the country.