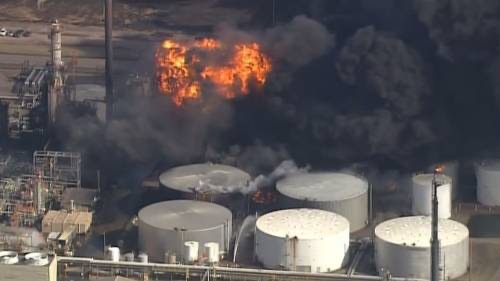 Scores of people have been feared killed following an explosion at an illegal refinery site in Rumuekpe community in the Emohua Local Government Area of Rivers State.

It was gathered that the site of the illegal refinery known in Ijaw parlance as “kpo fire” burst into flames, killing most of its operators and injuring others.

Confirming the incident to Newsmen the Police Public Relations Officer, Nnamdi Omoni, said that he was yet to ascertain the number of deaths saying that a detachment from the state police command had been deployed in the area to ensure there was no breakdown of law and order.

Meanwhile, a local security commander, Frank Nwazimutor, confirmed that five of the persons that died in the explosion hailed from his village.

“It is a fire outbreak based on the kpofire business that they do. There was a fire outbreak that caused loss of life. But not up to 20 persons have died. 22 persons were burnt but the dead body we have counted now is four.

“Some are from our community and others are outsiders and others we cannot identify who were caught up in the fire. That is where the problem lies right now.

“The community is not too tense, rather, where there is pressure is in the forest where the bunkering business is going on. Inside the community, it is calm,” he said.