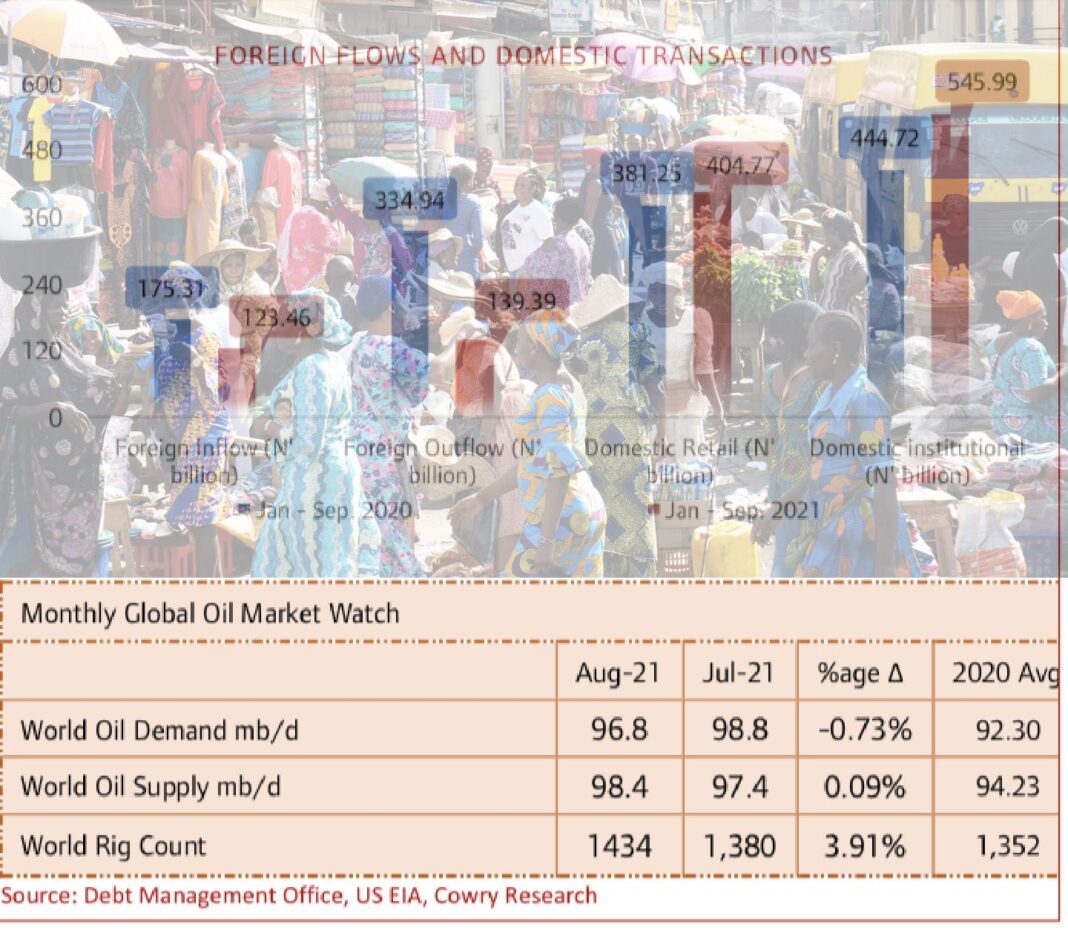 In the just concluded week, a fresh report
released by the Nigerian Exchange (NGX) on
domestic and foreign portfolio participation in equities trading showed that total equities market transactions increased significantly in
September 2021 compared to the volume of
transactions executed in August 2021. The jump in total transaction value was chiefly driven by domestic institutional investors as they moved to participate in the interim dividends declared
by some companies, especially the Tier-1 banks which declared half-year dividends.

Also, local investors appeared to have taken position in some fundamentally sound stocks ahead of the release of corporates’ 9 months financial results – which Cowry Research feels would largely be positive.

Retail investors participation was relatively quiet compared to the level of transactions printed in August – we suspect that retail investors want the financial results of companies released before they take further action.

However, foreign portfolio investors further moved out of the local equities market as they recorded net outflows in the month of September.

Notably, domestic institutional investors’ gradual movement into the equities market to pick up the sold shares at cheaper prices was partly stimulated by the downward trend in money market rates within the just ended quarter (Q3 2021).

Speaking to the figures, domestic institutional investors recorded the highest transactions, followed by retail investors; while foreign portfolio investors’ contribution remained the least with a larger increase in outflows.

The FPI transactions declined to N24.35 billion in September (from N25.36 billion printed in August).

On the part of local investors, we saw increased stake in the equities market – their purchase transactions was N47.17 billion, higher than N46.63 billion worth of outflows.

The domestic institutional investors’ inflow transactions were N32.65 billion, higher than the N29.39 billion worth of outflows from them.

Given the bullish approach of the local institutional investors, the NSE All Share Index (ASI) rose by 2.55% to 40,221.17 index points for the month of September 2021.

Cowry Research expects the equities market to be bullish in the last quarter of the year as the market awaits 9 months financial results of companies which would largely be positive.

More so, given the inability of FPIs to repatriate their funds amid shortage of US dollar supply, we anticipate a re-entry by the FPIs into the equities market ahead of final dividend payment, pending when CBN provides dollar liquidity.

On stock picks, we are positive on some of the tier-1 banking stocks, such as ZENITHBANK and UBA as they are likely to sustain or increase their dividend payouts.