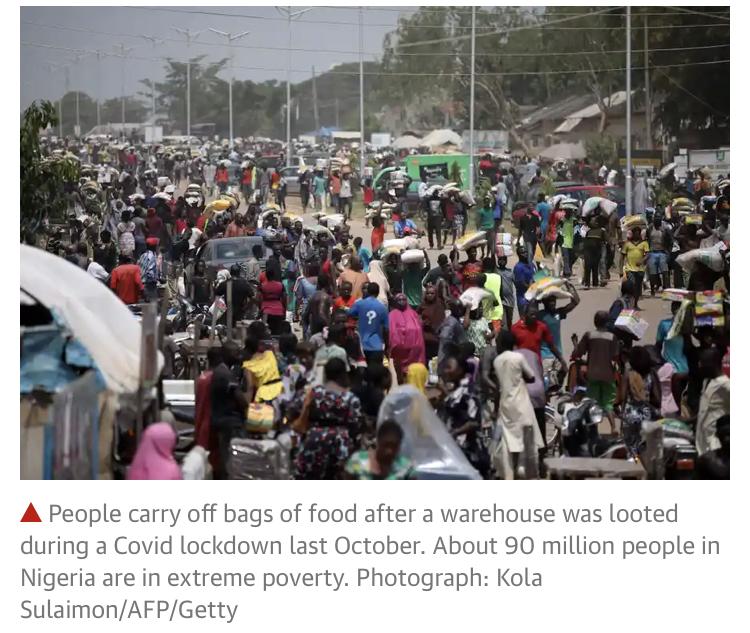 In the first in a series on Africa’s most populous state, we look at the effects of widening violence, poverty, crime and corruption as elections approach

A series of overlapping security, political and economic crises has left Nigeria facing its worst instability since the end of the Biafran war in 1970.

With experts warning that large parts of the country are in effect becoming ungovernable, fears that the conflicts in Africa’s most populous state were bleeding over its borders were underlined last week by claims that armed Igbo secessionists in the country’s south-east were now cooperating with militants fighting for an independent state in the anglophone region of neighbouring Cameroon.

Revealed: 60% of Americans say oil firms are to blame for the climate crisisUS TV crew member voices concerns over safetyHow the US fails to take away guns from domestic abusers: ‘these deaths are preventable’

Prince Andrew given deadline to face questions in Virginia Giuffre caseFDA to debate authorizing Pfizer’s Covid vaccine for kids aged five to 11Julian Assange: what to expect from the extradition appeal
How the US fails to take awayguns from domestic abusers: ‘these deaths are preventable’

How the US fails to take away guns from domestic abusers: ‘these deaths are preventable’

The mounting insecurity from banditry in the north-west, jihadist groups such as Boko Haram in the north-east, violent conflict between farmers and pastoralists across large swathes of Nigeria’s “middle belt”, and Igbo secessionists in the south-east calling for an independent Biafra once again, is driving a brain drain of young Nigerians. It has also seen the oil multinational Shell announce that it is planning to pull out of the country because of insecurity, theft and sabotage.

Among recent prominent victims of the lethal violence was Dr Chike Akunyili, a prominent physician in Nigeria’s southern state of Anambra, ambushed as he returned from a lecture to commemorate the life of his wife, Dora, who had been the head of the country’s national food and drug agency.

Who killed the widower and his police guard remains unclear. The Indigenous People of Biafra (IPOB), an Igbo secessionist movement whose militancy has grown increasingly violent and which has vowed to prevent November’s elections for governor in Anambra state, has denied involvement.

So too has the security agency, the Department of State Services. Eyewitnesses reported that the attackers, who also killed his driver, were shouting that there would be no elections in Anambra.

What is clear, however, is that Akunyili’s murder is far from an isolated event in Africa’s second-largest economy – a country facing multiple and overlapping challenges that have plunged many areas into violence and lawlessness.

From Boko Haram’s jihadist insurgency in the north, to the escalating conflict between farmers and pastoralists, a growing piracy crisis in the Gulf of Guinea and the newly emboldened Igbo secessionists, Nigeria – under the presidency of the retired army general Muhammadu Buhari since 2015 – is facing a mounting sense of crisis as elections approach in 2023.

Those security issues are in addition to a series of other problems, including rising levels of poverty, violent crime and corruption amid an increasing sense that the central government, in many places, is struggling to govern.

All of which has prompted dire warnings from some observers about the state of Nigeria’s democracy.

One of the bleakest was the analysis delivered by Robert Rotberg and John Campbell, two prominent US academics – the latter a former ambassador to Nigeria – in an essay for Foreign Policy in May that attracted considerable debate.

“Nigeria has long teetered on the precipice of failure,” they argued. “Unable to keep its citizens safe and secure, Nigeria has become a fully failed state of critical geopolitical concern. Its failure matters because the peace and prosperity of Africa and preventing the spread of disorder and militancy around the globe depend on a stronger Nigeria.”

Even among those who dispute the labelling of Nigeria as a fully failed state accept that insecurity is rising.

Nigeria’s minister of information and culture, Lai Mohammed, accepts that insecurity exists but insists the country is winning the war against its various insurgents.

But if the murder of Chike Akunyili represents anything, it is the dangers facing Nigerians in many parts of the country. This has prompted some to argue that the country’s centralised federal model, a legacy of independence and the long years of military rule, is in need of reform.

While Nnamdi Obasi, who follows Nigeria for the International Crisis Group, would not yet brand Nigeria a failed state, he sees it as a fragile one with the potential for the situation to worsen without radical improvements in governance.

“I’d say the country is deeply challenged on several fronts,” he said from Abuja. “It’s challenged in terms of its economy and people’s livelihoods.

Timeline
Nigeria since independence
“There is a sense of disappointment in the fact that the country hasn’t developed as people had expected and has suffered reversals in poverty and youth unemployment. Then there’s the dearth of infrastructure and a generally very poor quality of services.

“On the security front there are several main areas of concern. The first is the north-east, which is where Boko Haram and Islamic State in West Africa (Iswap) are located.

“In the north-west there are armed groups who are generally referred to as bandits but who have, in a sense, grown beyond that definition of ‘bandit’. [Recently] they attacked a military camp in Sokoto state and killed 12 military personnel.

“Then there is the old problem in the Niger delta [Nigeria’s main oil-producing region], which remains unresolved.”

But the Niger delta’s bubbling disquiet has in recent years been eclipsed by other conflicts – particularly that between pastoral herders and farmers in Nigeria’s central belt, and the re-emergence of an armed Biafran nationalist movement in the Igbo south-east.

This separatist activity is happening for the first time since the end of the Biafran war, from 1967 to 1970, which led to widespread starvation and left a million people dead.

For many Nigeria experts, the lesson is not to be found in the individual parts of the crisis but in the way they are beginning to bleed into one another.

As Obasi points out, the conflicts between nomadic herders and farmers have been in part driven by the displacement south of pastoralists from the north-east and north-west by the insecurity in those regions, while a widening sense of impunity across Nigeria has driven people to arm themselves.

“Insecurity seems almost nationwide,” said Obasi. “People have difficulty moving from one city to another, with kidnappings and danger on the highways.

“It is going from a largely governed country with a few ungoverned spaces to a place where there are a few governed spaces while in the rest of the country governance has retreated.”

It bodes ill for Nigeria’s democratic system of civilian government, adopted in 1999 after long years of military rule that began in 1966 apart from a brief four-year interregnum during President Shehu Shagari’s second Nigerian republic, which ended in 1983.

It was Buhari – who now calls himself a “converted democrat” – who succeeded him as head of state after he overthrew Shagari’s government in a military coup.

While the 2011 elections were seen by the US as being among the “most credible and transparent elections since the country’s independence”, Nigeria’s politics have long been complicated by an unwritten agreement among its elites that power should rotate between a figure from the Muslim-dominated north and the mainly Christian south every two terms. With Buhari’s two terms due to end in 2023, power will then – in theory at least – rotate to the south.

Leena Koni Hoffman, a research associate at the Chatham House thinktank and a member of the Nigerian diaspora, says ordinary Nigerians feel “vulnerable” and “grim”, suggesting that the rotational system of government may no longer be fit for purpose.

“The agreement negotiated by the elites is broken. It is not inclusive and the democratic dividend is not being distributed,” she said.

The consequence, she adds, has been that Nigeria’s politics has fractured, with “people exploiting ethnic and religious differences to give people answers that match questions in any part of Nigeria”.

“To give you an idea of the scale of the conflict happening in Nigeria, I could show you a map coloured pink for where violence is happening – it is pink all over.

“For a country that has not been at war since the Biafran war that ended in 1970 – and in the middle of the longest stretch of civilian democracy – to be experiencing this scale of intense violence should be alarming,” she said.

“We knew a long time ago that the country’s rural population had little security, but now we understand they are being exposed to violent non-state actors who have worked out that the security apparatus is hollowed out.

My family comes from the middle belt. My father is a retired accountant who wants to farm but he can’t be in his home town because it has been decimated by violence. You hear of incidents where 30 people are killed here, a dozen there. Villages attacked.

“More and more communities are seeing that the government is not stepping in with its security forces and are forming their own vigilante groups.”

Aggravating the sense of a state being hollowed out is an under-resourced and overwhelmed judicial system that has left ordinary Nigerians with little expectation of access to justice.

Writing on Facebook after his death, Akunyili’s daughter described their last conversation the day before his killing, with questions that many Nigerians are asking.

“I asked him if he was being careful and he assured me that he was, going on to add that he never went out any more and was sure to be home by six. Convinced, I reminded him to be even more careful and to take care of himself.

“We can choose a different path,” she added, referring to ubuntu, a concept of humanity and community based on the idea: “I am because we are.”

“This current [path] leads to more senseless death and pain for one too many,” she said.