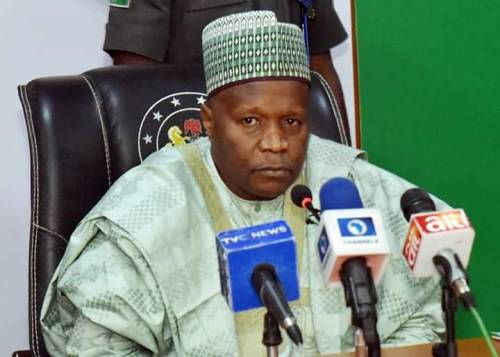 Governor Muhammadu Yahaya of Gombe State says the De-radicalisation, Rehabilitation and Reintegration Camp for repentant Boko Haram members located at Kwami Local Government Area of the state should be relocated to the Nigerian Army University in Biu.
Yahaya stated this while receiving the General Officer Commanding, 3 Division, also known as Operation Safe Heaven, Maj Gen Ibrahim Ali, at the Government House on Tuesday.

He said despite providing shelter for the Federal Government’s initiative, the camp had only hosted non-indigenes adding that the state should not be made to suffer for hosting such facility.
The camp, which has rehabilitated hundreds of repentant Boko Haram members mainly from other parts of the North-East, in a facility built by the state government for the National Youth Service Corps as orientation camp.
Yahaya said, “Gombe has been hosting the de-radicalisation camp for the past six years.
“It was meant to be a temporary arrangement for six months, but now, it has turned to be a permanent feature and the security authorities are even looking for expansion.
“Since the establishment of that outfit, not even one person from Gombe has been taken to for de-radicalisation or rehabilitation. We are just playing host, trying to help our neighbours. As a result, we should not be made to suffer for hosting such a facility.
“Otherwise, if you like take it to the military university at Biu, and make it a faculty, that is not our problem. There is the need for us to have a symbiotic relationship. If you scratch our back while we scratch yours; that is the only way we can move forward.”
Yahaya lamented how due to the security challenges, getting approval for the movement of urea which is used for manufacturing fertiliser to Gombe, has been difficult, adding that hunger might worsen the problems being faced by the people.
“Close to 80% of our people are peasant farmers. Recently, despite approval from defence headquarters, we were not able to bring urea because it is believed that it is being used to produce explosives and that some misguided people are using it.
“But since 2015, there was never an issue again of explosives in Gombe. If you don’t allow people to operate on the farm, there will be no security and there will be no food. Double jeopardy is the situation now,” the governor said.
SaharaReporters had reported in September, the Acting General Officer Commanding (GOC), 7 Division, Abdulwahab Eyitayo, revealed that more than 8,000 Boko Haram terrorists had so far surrendered to the troops of the Nigerian Army.
According to him, the terrorists surrendered from their enclaves in Sambisa Forest, as well as other hideouts.
He said the overwhelming firepower of the troops was responsible for the surrender of the repentant terrorists.