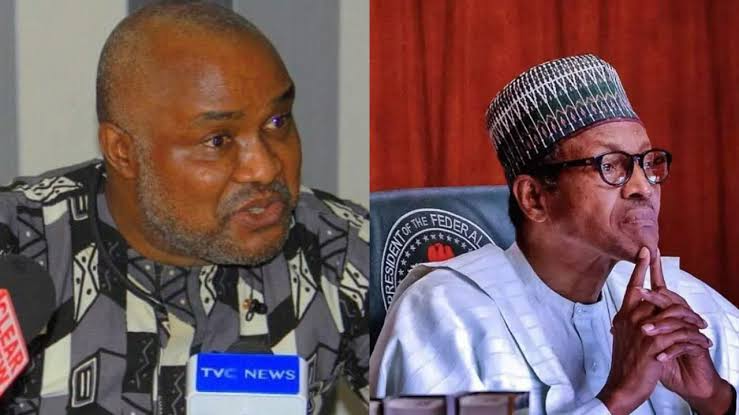 We in the HUMAN RIGHTS WRITERS ASSOCIATION OF NIGERIA (HURIWA) have once more observed with shock the deliberate delay tactics of the Armed forces to crush the terrorists in the North West of NIGERIA masquerading as mere armed bandits. We regret to observe that these terrorists who are mostly ethnic Fulani same ethnicity with all the heads of the internal security institutions are still operating freely in Kaduna, Niger, Zamfara and Katsina and have killed scores of citizens only in the last few days.

The primary responsibility as the President is the protection of lives and properties of citizens.

According to Section 140(1) A person elected to the office of President shall not begin to perform the functions of that office until he has declared his assets and liabilities as prescribed in this Constitution and he has taken and subscribed the Oath of Allegiance and the oath of office prescribed in the Seventh Schedule to this Constitution. (2) The oaths aforesaid shall be administered by the Chief Justice of Nigeria or the person for the time being appointed to exercise the functions of that office. Section 141 – There shall be for the Federation a Vice-President.

OATH OF OFFICE OF PRESIDENT STATES AS FOLLOWS:

The Global Terrorism Index (2019) ranked Nigeria as the third-worst nation prone to terrorism with no improvement since 2017.

Asides insurgency, banditry, kidnapping and secessionist violence are pushing Nigeria towards the brink of collapse with many calling for the resignation of the president for “failing” to secure the country.

For the past six years the insecurity across Nigeria has worsened beyond the Boko Haram insurgency. Virtually all parts of Nigeria are currently battling one form or another of violent crimes, evidence that the president has failed to keep his promise on security.

Many Nigerians did not believe their President, and currently many more rather feel the opposite about his positive self-assessment – that things have actually gone from bad to worse under Buhari’s watch.

These sentiments were expressed by former President Olusegun Obasanjo, who said he was embarrassed about how President Buhari is running the country, insisting that Africa’s most populous black nation is moving towards becoming a failed State. The former President then openly accused the current administration of mismanaging diversity by allowing disappearing old ethnic and religious fault lines to reopen in greater fissures with drums of bitterness, separation and disintegration.

The analysis showed that insecurity affects economic growth by drying-out investments, increases unemployment and dwindles government revenue, amongst others. Despite these effects, government capital expenditure on internal security did not grow astronomically to match the hydra-headed problem.

Obasanjo is apparently not alone. Wole Soyinka, poet, essayist and first African Nobel prize winner, concurred with the former President’s assessment, describing the country as a crumbling edifice on the edge of collapse. According to another elder statesman, the former governor of Kaduna State, Alhaji Balarabe Musa, referring to attacks across the country by bandits and criminal herdsmen, the failure is because ‘no serious and patriotic government will allow this level of killings of its citizens by terrorists and be watching aimlessly’. A prominent Islamic scholar, Sheik Murtala Sokoto, described those still praising Buhari as liars and hypocrites.

Even within the President Buhari’s own party, many people who worked for his victory now complain openly that the mission that brought them to power might have been wilfully abandoned.

Adegbami (2013) noted that insecurity has led to the destruction of business and properties, equipment’s, relocation and closing down of businesses. Many business operators who were residing in the northern part of Nigeria have either close down or relocated their businesses due to Boko Haram insurgents.

THE EFFECT OF FAILURE OF THE PRESIDENT TO STICK TO HIS OATH OF OFFICE.

Where the President fails to fulfil his constitutional duties as stated above, we demand he step aside or the National Assembly initiates impeachment proceedings against him on grounds of gross misconduct as provided for in Section 143 of the 1999 Constitution of the Federal Republic of Nigeria.

We remain hopeful as citizens of Nigeria and call on all Nigerians to keep hope alive as we bond together and build………………..